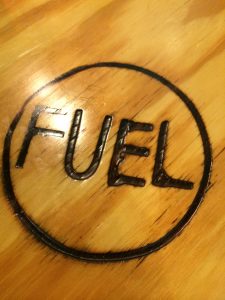 Who dwells over the children stooping over an atomic basin as they slap a pair of new sneakers before the cashier? Who lends a thought to the by-catch carcasses while ordering a roadside meal of fish and chips.? Trudge down creamy-floored aisles, eyes scanning the shelves for a cheap deal. Those numbers are golden, and Fair Trade emblems are subdued.

$5.00 Special K. Avert your gaze, friends, then pat your over-tried wallet when you land a better bargain. We love finding a dollar-done deal, simply because there’s no reason to cash out on that bag of $8.00 trail-mix when we could tie ourselves over with a $2.00 Lay’s. Logic at work, fellow consumers. Watch and learn.

We must stop for a moment. Just a fractured moment—before you slip the cellophane into the cart. Once more, let’s run our eyes over the little white card tucked beneath the shelf. The price states $2.00, a typical value. Still, I beg you to hold on to your sanity, long enough for me to delve a little deeper behind the scenes of these three digits.

And what does it actually measure?

The Merriam-Webster Dictionary defines price as “the amount of money given or set as consideration for the sale of a specified thing.”

Merriam is not wrong, but it could not have been more vague. Why is the money set the way it is? Why are some things more expensive than others? These fail to be revealed in the definition.

So, how can these be explained? Take those socks as an example.

Said company wants to manufacture a new line of cotton peds for cheap. Making a profit is the sole aim of any rational capitalist, and so the best way to sell this product is to utilize the cheapest modes of production, transportation, and distribution. Generally, we want the picture to look a little something like this.

Last but not least, run some thirty-cent advertisements across that social media platform, and slap those packages onto the end-cap’s frail shelving unit. Making one pair of peds cost you less than a dollar.

What’s all the hype about profit, anyway? See it this way—it may be enough money for us to make a decent living if we set the price of a pair of socks to what it cost us to make, but we want more. We don’t want just a “decent living”; we want lifestyle. We want to go on holiday vacations, eat out at five-star cafés, and join the town’s country club. To achieve that lifestyle, we need more money.

Price, as illustrated by our peds, is determined by the methods of how something is produced. Not only that, but the costs of a certain plays a major role. The prices you see plastered over food packages and souvenirs are the numerical manifestations of how much money the company pays to ensure their product makes it to the shelves. For our capitalist, inexpensive methods of production means more money in their pockets.

It seems simple—dirty, yes, but simple enough. Production is all about making as large of a profit as possible. But there’s an inevitable dark side, and it’s where the consequences of utilizing such inexpensive methods get figured in. Things start to complicate.

Let’s hand the mic back to our capitalist.

Our socks will be stitched by children receiving less than a dollar a day—but shoppers won’t see that. The cargo planes we’re shipping in will most definitely not be eco-friendly. Because, who wants to pay extra for the fuel swap? Not me.

Using the cheapest methods of manufacturing are the equivalent of using the most unethical methods of manufacturing. No wonder the so-called ‘organic’ foodstuffs are more expensive—they are grown more ethically. When our socks were being manufactured, we tallied in the costs of time and efficiency, which are what gave us our price. But we left out other kinds of costs, too.

These costs are not reflected on the price tag, but that does not mean they don’t exist. When we choose a cheap textile factory in Gujarat, we know we are supporting the child labor occurring there. But what is measured is the inexpensiveness—not the level of morality, not the harmful working conditions of the children. We could have chosen to have our socks manufactured at home, where we wouldn’t have to be concerned with the immense amounts of pollution, courtesy to cargo planes shipping from Asia to the Americas. Yet again, it is not the environmental destruction we are advertising in the price tag.

If companies began adding the social and environmental costs of their methods into their prices, the numbers would climb. We would hesitate to reach for the bag of Lay’s chips just as we do with a bag of organic ones. The reality is that most companies don’t figure in all the costs, and never will, until regulations are made for them to do so. Profit is important. Actual needs come second.

Under capitalism, unethical corporative behavior is rewarded with low prices, while ethical behavior receives hard-to-reach prices. It is hard to accept that a gas-powered car will be cheaper because the fuel needed to run it was obtained by blasting off a mountaintop, as opposed to painstakingly crafting a battery to power an eco-friendly vehicle. We live in a world where cheap matters more than values, in the corporate sphere. Price, which measures efficiency, fails to include the costs of that efficiency. Until consumers fully realize this, companies using destructive methods will continue to be supported while those using ethical methods will be discouraged.

Paying for something at a higher price seems futile, especially when there are cheaper alternatives. But as consumers, we have a choice in which companies we support; our purchases are our votes for ethical, or unethical, production. When looking at a price, we should ask ourselves, “Is it worth it?”

Despite the answer, one thing is certain—the damage has already been done. Ultimately, we will have to pay the costs.

2 thoughts on “What Does Price Actually Measure?”