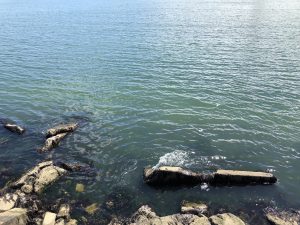 The shape-shifting miracle material. It can take the form of nearly anything from a bag to a blow-up castle to a microchip implanted in a puppy. More than eight million tons of it are dumped into our oceans as a yearly regimen, and it is responsible for the one hundred thousand animal deaths year-round. Boasting a biodegradation period of four hundred years, it’s expected that it we start seeing plastic spurting out of gutters and washing up onto our beaches tenfold. It’s something that can’t disappear overnight, or over centuries, for that matter.

So, the question looms.

What do we do with it?

Plastic debris is seen as waste. Recycling certain plastics is one method to keep it from heading straight into the landfill. The Plastic Bank, an environmental and people-oriented organization, takes the recycling one step further.

The Plastic Bank, founded in 2013 by David Katz and Shaun Frankson, strengthens recycling, halts the flow of plastic into marine ecosystems and provides aid to people who live in poverty. Founded in Vancouver, Canada, it has since expanded to serve communities in Haiti and the Philippines. Their organization revolves around the idea of Social Plastic, which means giving plastic so much value that it is no longer considered waste—and monetizing it.

Converting plastic into a currency is an idea that has been toyed with even before the emergence of the Plastic Bank. TerraCycle, an organization founded in 2001, collects plastic from individuals in exchange for ‘points,’ which are then put toward the individual’s charity of choice. There are also many recycling centers that pay individuals for the materials they bring. (In Michigan, for example, a plastic bottle is worth ten cents.)

The Plastic Bank’s aim is to make a direct impact on impoverished people through their recycling. Their system encourages locals to collect plastic debris and bring it to a Bank center nearby, where it is then exchanged for goods, or money. The Bank sells the collected plastic to companies who want to utilize it. The money received from these companies is, in turn, the currency that is distributed back to the people.

The Plastic Bank does not get rid of plastic. By adding value to it, it acts as the moderator of a healthy recycling movement that connects both the community and outer enterprises.

But there’s a catch. As the Plastic Bank developed, they turned to blockchain technology to keep track of their financial transactions, as well as being a new method of paying their plastic collectors.

Due to intricate math, blockchain is currently the most secure form of digital financial recording, and storage, available. Since many of the communities the Plastic Bank works with have access to mobile devices that are able to handle transactions, blockchain became the safer option of exchange. Those who hold physical cash are likely to become targets. Blockchain currency is not physical, and so the money received is more secure, as is the recyclers’ safety.

Blockchain is the irony of the Plastic Bank. The combination of progressive technology with the venerable action of recycling is what makes the Bank’s approach to the plastic problem so unique. In caring for the environment, it is essential to empower people on an individual level, as well. Focusing on a balance is what makes the Bank’s process a true solution.

While the Plastic Bank has been a success for some communities, their process has not been expanded throughout any nationwide economy. No matter how much our financial systems progress, the plastic problem will remain. Recycling is the best solution we possess, and since it is already in practice, the future of world depends on its growth.

If the issue is to be solved, plastic production will have to come to an end. For Social Plastic to be expanded globally, it will be up to governments, if not individuals, to advocate for recycled plastic while discouraging further production. The Plastic Pollution Coalition states that every piece of plastic ever made still exists today and will be in existence for at least five hundred years, whether it’s in the form of toxins in the soil to being burned up in the clouds. Ending plastic production does not mean the end of plastic. Rather, recycling offers plastic the opportunity to continue to exist, and to do so with meaning.

Plastic will never disappear. But its use is a double-edged sword, providing much good in our way of life while degrading life itself—and never something to take for granted. Before communities, or even nations, take the first step in establishing more plastic banks, individuals as well as corporations must learn to see and experience the value that plastic has to offer. Purchasing recycled materials, recycling plastic, or repurposing it are all impactful ways of breaking the notion that plastic is a one-time use, futile material.

Returning to the original question, what is the solution to the plastic problem? What do we do with it

Second, all plastic must be given value. Without it being in demand, recycling becomes a fruitless endeavor.

Third, corporations and individuals must work together to ensure that recycling uplifts both ends. This may occur through systems like blockchain, where individuals would be paid specifically for the recycling they do in a secure way. Solving the plastic problem is just as much about helping our own species as well as the environment, from the individual level, to the state, to the corporate. While we created the problem, we are the only ones who can solve it. Saving the oceans saves us.

Fourth is that through working together—communities with companies, people with the planet—there is hope.