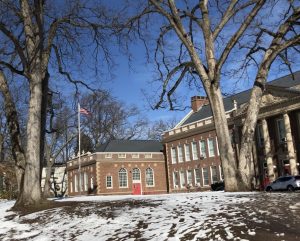 According to CBS News, the student-organized March for Our Lives drew more than 200,000 people in D.C., and millions nationwide. The Associated Press called it the largest youth protest since the Vietnam War.

Jaclyn Corin is Marjory Stoneman Douglas’s junior class president and an outspoken critic of NRA-funded politicians. Alfonso Calderon is also a junior, and both students are founders of the Never Again movement. On April 13, the two young activists visited Montclair High in New Jersey to share their experiences in the wake of the Never Again movement with the students.

That Friday morning, Montclair students filled seats in the auditorium as the young pair took their seats on the stage. The student body settled down. The first question was posed.

How have their lives at school been since returning?

“There was a huge sense of community,” Corin said. “It’s kind of back to normal in a sense, but there’s a lot more security.”

Stoneman Douglas has implemented a slew of new security protocols; one of the most notorious is the requirement for students to wear clear backpacks on campus. The Miami Herald reported that students must also wear identification badges on campus at all times.

The discussion turned to legislation. Calderon described wanting universal background checks and an “assault weapon” ban. He pointed to Australia’s gun ban and reduced gun violence as the ideal situation. “I understand that not everyone will give back weapons. But as we saw in Australia . . . many, many lives were saved.” A government report by the Australian Institute of Criminology stated that the amount of homicides involving a firearm decreased by 57 percent between 1989-90 and 2013-14.

Calderon also mentioned the Center for Disease Control and Prevention (CDC), a federal public health institute. “Because of the NRA, the CDC is barred from studying gun violence,” he said. In “The New York Times,” Warren E. Leary covered a 1993 study determining that having a firearm in the home was dangerous: “Gunshot wounds were by far the most common cause of death, killing … 49.8 percent, of the victims killed at home.” According to Dr. Mark Rosenberg, the former director of the National Center for Injury Prevention and Control, funding for the CDC’s firearm-related research was reduced by 90 percent as a result.

Corin urged the student body to educate themselves on the issue; “You can educate yourself. Make politics a part of your everyday life.”

“Jaclyn may shrug it off,” Calderon said, “but I embrace it.” He continued to explain how he had once “tweeted” something in Spanish, which resulted in people believing he was a spy from Columbia trying to overthrow the U.S. government. “Guys, I’m not even Colombian though.”

During the question-and-answer segment, a student asked how the activists planned to keep the gun control issue pertinent in the U.S. “The sad truth is that people don’t stop expressing gun violence,” Calderon said. “There are going to be times when something irrelevant like Stormy Daniels gets the cover of “Time” magazine.” However, he stated that gun control is one of the primary issues for young voters in the country.

The activists also addressed conservative students, who “do not necessarily want more gun control,” but want to help work against the tragedies. “I’ve leaned right all my life, being completely honest with you,” Calderon said. He continued, “But there’s one thing that links [school shootings] all together—a gun.” He explained that the case should not discriminate. “Don’t make this an issue of Republican and Democrat. Don’t make this an issue of young and old. Regardless of parties, issues and candidates, think of what’s right for the people.”

The final question—what do they see in the future of the movement?

“To be honest with you guys, we’re looking at it,” Calderon said. The auditorium filled with murmurs. “What is real change? What is something we can do to not feel safe, but be safe? We don’t need a hundred million cops.” He concluded his statement by repeating the importance of education. “To really keep kids safe . . . we need to educate ourselves. Of most voters, only one in five, vote. You have to vote [in elections], even in the [lesser] ones.”

Corin added, “We feel a civic duty to continue this. I’m okay with my life not being the same because I know I’m doing something good.”

“You guys are gonna be the change,” Calderon finished. “We want you to know that.”