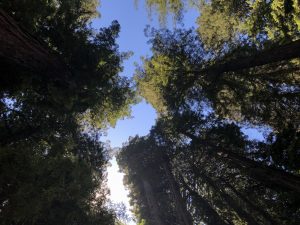 It came with a hiss in the ear. A simmer rippling underfoot. It went with a holocaust of stone collapsing into ash, inverted chlorophyll mingling with sobbing flames, toxin-laced fog, soot-woven beards. Another day’s work. Fire surging with the blood of blue jays, lively rivulets gone sour with a blue-collar sigh. It lasts a second. Everything from pixels to smiles threshing with oil, road tracks contouring laurels, cartilage, light, and staggers the motor of the world.

“Up at the camp. Truck leaves, ah, in two days. He is loading the drills.”

“Damn, that guy. If he stays out any longer he’s gonna make us all get our shifts extended. Hell—steroids, did you say, Emden?”

“Of any job in this damn country? No, that can’t be the reason.”

“Better be. It wouldn’t have been my first choice, of course—but the wages are good. I’ve gotta get out of that hellhole somehow.”

“What about you, Cal? Missed the smell of mildew too much? Calum. Calum.”

“Oh, yeah. That smell along with the ninety million barrels of death down there to feed our state. To feed our country.”

“Anyway. We have a minute before Rich’s done with loading.”

“Tell me about it. Half the team’s already started digging down the TNT. We’ll get it done quick, I guess.”

“Been ready for a week.”

“We’re getting into the truck. Come on. A mile up and a mile down.”

“The countryside’s beautiful, isn’t it? The water’s so clear down there—look, Rich. Look at the waterfall.”

“You guys heard about Iran?”

“The world’s heard about Iran, Cal. What happened, mass suicide?”

“One of our ships shot down a plane from Iran. There were two hundred people in it. They all died. All of them.”

“It’s horrifying, I agree. Really is. Damn. While we’re up here on this hunk of dirt there’s people being hacked apart in the bottom of some pit. Ever thought about that? We’re lucky, Calum. Damn. We’re too lucky.”

“You’re gonna do something about it, Em?”

“What I mean is that we can’t do anything, won’t do anything about it, because we’re too afraid. We’re afraid for them, but even more afraid to help.”

“It’s not our place, Emden. Let the government figure it out.”

“Hell with the government.”

“You’re working for the government, Emden.”

“Why? It’s not the government that needs to be hated. It’s the system.”

“Hell with the system.”

“Just give me my paycheck and hell with the rest.”

“You still haven’t answered the question.”

“You never asked anything.”

“Why? There aren’t any other options. I don’t believe in money, but I still have to pay the bills.”

“You’re a hypocrite, Em. You could get loans and stuff. They’ve got all sorts of programs.”

“All I’m saying is that you shouldn’t hate the people who serve you. Remember Iran. They’ve got it worse.”

“It’s beautiful up here. Come on, Xano. Let’s get the barrels down.”

“Those are pretty heavy. I’ll give you guys a hand. Then I should probably go talk to the other guys. What do you think the altitude is up here, Em?”

“The wind sure is nice at this height.”

“No shade, though. Do you have any water, Cal?”

“Check in the trunk. There’s gotta be some kind of liquid.”

“Hell yeah. I’m going to start setting up. There isn’t anything in that trunk but bombs.”

“To your great disappointment.”

“Well, yeah, some cool beer wouldn’t have been such a bad idea.”

“Next time, Em. Alright, I’m gonna check up on the rest of the crew. Meet ya back down here.”

“Hey, Xano. Pass me that soda, will you? It’s in the back of the trunk—yeah, that’s it. Thanks a million, bud. You want some? Help yourself, Xano. The stuff’s a day old. Not as good as beer, anyway—it gets hot up here. Nothing like a soda. Yeah, just dig a hole there. Plop ’em in. Xano, how do you like this job?”

“Well, well, Xano. But let me ask you another thing. You feel bad about it? The job, I mean. Just—how do you feel about what you did, right there? Just now?”

“Yeah. You just tossed a bundle of TNT into a hole.”

“If I had a different choice, I think that I would hate what I just did. But while I need money, this is all I can focus on, so I do not feel too bad. But still, a little bad.”

“Yeah, looks like he’s running from a tsunami. Look at the guy. I guess the hill’s pretty steep, anyways.”

“Took the words right out of my mouth, Calum.”

“It was a pretty mountain.”