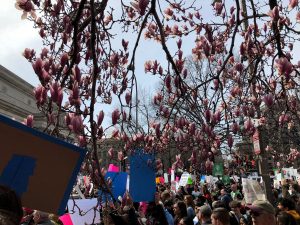 Kyle Kashuv is a junior attending Marjory Stoneman Douglas High. Like other students from Parkland, Florida, he has become a political activist after the tragic shooting on February 14, 2018. And he fights for Americans’ gun rights.

After February 14, the student-precipitated Never Again movement gained momentum with the voices of Cameron Kasky, Emma Gonzalez, David Hogg, Sam Zeif, Jaclyn Corin and many others. It calls for increased gun control nationwide. Kashuv, however, believes that there are alternative ways to address the issue of school shootings.

To avoid gun-related tragedies in the future, Kashuv advocates the strengthening of background checks and improved school security. He was able to communicate these beliefs on March 13th this year, when he became the first of the students at Marjory Stoneman Douglas to meet with the president. The young conservative met with Donald Trump for a conference in the White House to discuss the passage of a bill addressing violence in schools. The bill is known as the STOP School Violence Act, which Kashuv said, “reached all of the issues of the Parkland shooting without debating gun control.”

The STOP Act was originally introduced by Republican House Representative John Rutherford weeks before the Parkland shooting. As a result of the tragedy, it now has 94 bipartisan sponsors in the House. It would provide $50 million per year to create anonymous reporting systems for violent threats in schools, develop student, teacher and law enforcement training to prevent violence and develop school security infrastructure.

In his own words, Kashuv said that the STOP Act would “give … funding for better treatment of these kids, better development of technology at schools themselves and better communication between the FBI and the schools.”

The bill was passed on March 14 by the House of Representatives, on a vote of 407 to 10. Only five Republicans and five Democrats voted against it. It does not include the arming of teachers in schools.

Kashuv’s political involvement began soon after the shooting. He started using Twitter to voice his views on the issue of guns, and Michael Gruen, a 19-year-old “influencer marketer” from New York and a founder of Creator Edge Media, noticed him. Encouraged by conservative commentator Ben Shapiro, Gruen has helped the young activist amplify his voice by coordinating meetings with government officials.

During his interview, Steven Crowder asked Kashuv about his role in the gun control debate, to which Kashuv responded that he was “representing the conservative point of view and the Second Amendment, but also finding middle ground.”

Kashuv’s media exposure has been generally limited to Fox News Channel. He was not invited to speak at the CNN town hall in February or at the March for Our Lives in March. When asked about his lessened media coverage, he recognizes that it may be a result of his pro-gun beliefs. In an interview with Fox News host Maria Bartiromo, Kashuv explained, “I think I’m getting pushback because I’m not taking the mass, majority opinion on this … I’ve taken a step back and looked at all the facts, and I’ve come to the conclusion that what I’m doing right now is what needs to be done, versus just marching and screaming about gun control.”

According to Broward County’s Sun-Sentinel newspaper, Kashuv supports “an intervention program for students with behavioral problems,” as well as strengthening the FBI’s involvement in monitoring background checks.

Kashuv’s minimized media presence has not stopped him from making concrete change at the bipartisan level. In his interview with Crowder, he discusses reaching out to officials coming from different points of view. He said, “We met with Senators because we had to reach across the aisle. This [STOP] Act is completely bipartisan. This shouldn’t just be a Republican issue or a Democrat issue.” When asked if he would participate with other media outlets, he responded, “If anyone asked me, ‘would you like to go on CNN or do this, or actually have a live interview?’ then sure.” He has met with Democratic Senator Bill Nelson and Republican Senator Marco Rubio from Florida, along with Democratic Senator Chris Murphy from Connecticut.

Between the bipartisan support of the STOP Act and dialogue between government officials, Kashuv still circles back to his hometown in self-reflection. He said, “I don’t say I speak for all Republicans or even all the kids at Stoneman Douglas. There are kids with a variety of viewpoints at Stoneman Douglas.”

After his meeting with the president and the first lady, as well as other lawmakers, Kashuv has gained a new perspective from an inside view of the U.S. government. In particular, he has debunked a personal misconception surrounding our government officials. Despite our government being portrayed as cold and uncaring at times, Kashuv feels that there are those who want what is best for Americans.

“Washington has shown me that there are true, caring human beings here,” Kashuv said. “There are real humans here.”