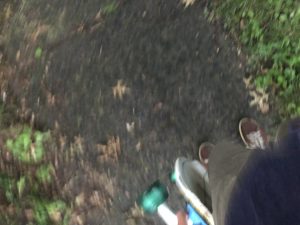 Nicholas was right. It was a good question.

I looked down the path. A man rode a low-seated bike over the bridge toward us. Nicholas kicked the board up into his hand.

It was obvious that Nicholas knew the guy. His father? Brother? Guardian uncle? I nodded to him. The man tilted his head a little in return.

“Fine,” Nicholas whined. I followed him over the bridge to the playing field. Darnell tagged along. Once we were there, Nicholas turned to me.

“You know what rape is?”

I was used to kids asking me abrupt questions, so I said, “Sure.”

“What? You know what rape is?”

“Yes. I am seventeen years old.” Just to see where the kid was coming from, I asked, “Do you know what rape is?”

He ignored me and tried popping some ollies on the turf. After a few attempts, he asked, “You know what gay is?”

“Yes,” I said slowly. Now I was a little worried. Just kidding.

Darnell gazed up at me. Nicholas kept slapping his foot onto the board.

This wasn’t what I’d normally talk about with the kids I babysit at his age, but obviously, this kid had this sort of a conversation before. I wasn’t going to treat him like he hadn’t.

“It’s … the same as being homosexual,” I finally said, as if to test him.

Nicholas ignored us both. “Is rape gay, or a faggot?”

How was I supposed to explain this? Why explain it at all?

“My brother does this to me,” Nicholas continued. He hopped off the skateboard and thrust his hips front and back, front and back. Darnell kept quiet beside me. I took in a breath.

Do I call CPS?

“How do you feel about him doing that?” I asked slowly, watching him. He was a such a beautiful boy. Hyper and amber-eyed. Stereotype of the runt growing up on the wrong side of the tracks.

I didn’t know what else to say.

Your brother is a pedophile? Do you need help? Where are your parents? Or the nearest police officer?

Can I help you?

Or he could be exaggerating. I didn’t know.

“Well, I tell him to stop, but he doesn’t.” Nicholas shrugged. “My brother’s gay,” he continued. “And he’s in prison. He said he was raped in prison.”

I wished that I could improvise a cute sermon like a therapist just to force my seventeen years of wisdom into his nine-year-old brain and convince myself that I was saving him from something in his future. But it wasn’t about words anymore.

That wasn’t even close to enough. These kids knew way more about life than I did before I even hit fourteen. I cared about these kids from the other side of the bridge. It seemed like I made them happy by hanging out with them once in a while, even though we were strangers. But I was concerned. Maybe it was fate, or something, that we crossed paths because I’d happened to be skating through the park that day. I needed to be in their lives.

I looked across the field. Some kids ran toward us. In another second, they stopped in front of us, panting and chattering amongst themselves. A girl stepped forward.

“We’re supposed to go back to the field house. Come on, Nick!”

Nicholas hopped off the skateboard and ran off with the kids. Darnell sprinted after him. “See you tomorrow!” he called over his shoulder. I watched them go.

I needed them to be in my life.

I looked down. One little boy remained smiling up at me.

“I can try to,” I laughed. “I think I can only do it on the concrete.” I stepped on the board, smacking and dragging my feet across the surface. The wheels barely left the ground. “Yeah. The turf isn’t good.”

The boy studied me for a second, his dark eyes squinting through the sunlight. Then he ran away.